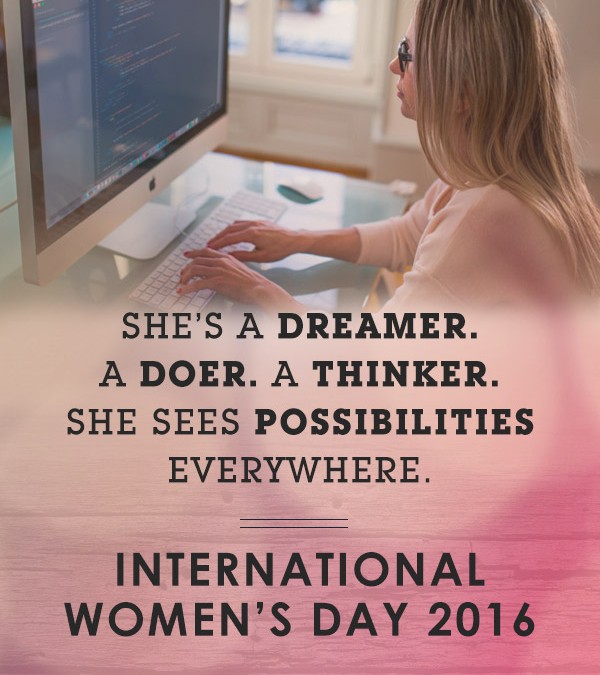 About 106 years ago, a woman named Clara Zetkin attended the second International Conference of Working Women in Copenhagen. It was at this meeting when Zetkin suggested the formation of International Women’s Day– a celebration that takes place on the same day each year, in every country. It’d be a day that honors women, their accomplishments, and their fight for equality.

Fastforward to today, March 8th, 2016, and we’re proud to still be celebrating women and their accomplishments. JB Systems believes in the importance of celebrating International Women’s Day. While there are more women programmers than there used to be, the technology industry has a ways to go in terms of embracing diversity and equality in hiring for programming positions.

At Team JB, we understand this, which is why we’re taking strides to help share the importance of encouraging young women to enter into STEM (Science, Technology, Engineering, and Math) programs. Especially if young women in middle school and high school are expressing interest in technology, the community around them needs to be supportive and encourage them to pursue these interests.

Traci, a web developer at JB Systems, began exploring her interest in programming when she developed a fansite for a game she liked to play. “It was fun, challenging, and a game in itself trying to get the platform to do what I wanted it to,” says Traci. “When I considered how much I enjoyed programming on my own time, I decided it was time to think about pursuing programming as a career.” Traci’s proud to say that her own interests in programming have encouraged her daughters to pursue interests in coding, too.

Jessica, JB Systems’ SEO Strategist, also has an interest in programming. She earned her bachelor’s degree from UWEC, and is now about to graduate with a degree in Software Development/Programming from CVTC . “Programming had always been one of those professions that I thought was outside of my capabilities,” says Jessica. “After being in the workforce for nearly two years, I decided to pursue my interest in programming. To be honest, I was terrified. After my first semester, though, all of that changed. For the first time in my life I felt I was being challenged. I was excited for class, for homework, and more importantly, to graduate and start building things that solved real world problems.”

While JB Systems’ has women programmers in the office, we’re thinking ahead to the next generation. According to Girls Who Code, “In middle school, 74% of girls express interest in Science, Technology, Engineering and Math (STEM), but when choosing a college major, just 0.4% of high school girls select computer science.” We want to help change that statistic. We want to ensure that young women see programming as a very possible career path, and that they are just as capable of programming as men. It’s why we’ve recently hired Ellie, a junior in high school, as our summer graphic design and late development intern. She’ll have the opportunity to explore both graphic design and website development, both of which are industries she’s interested in studying when she goes to college.

When asked if they have advice to young women who want to get into programming, both Jessica and Traci were eager to share.

“Women can excel in any subject they work hard at,” says Traci. “The world of Science, Technology, Engineering, and Math is moving forward at an exciting pace. It is wide open and waiting for people to embrace it. All you have to do is be brave enough to try.”

Jessica shares a similar sentiment on being brave enough to take a chance. “For those girls and women out there who think that coding is something that is outside of their capabilities, I ask you, ‘Have you tried?’” asks Jessica. “You are capable, and I believe in you, just as you need to believe in yourself. Sometimes, it seems, we just need someone to believe in us.”

#TeamJB wishes a Happy International Women’s Day from our team to yours!